The Town of Avon is located in the stunning Rocky Mountains of Colorado along the scenic Eagle River. The town serves as a gateway to the world-class Beaver Creek Resort and is eight miles west of world-famous Vail. It is a home rule municipality in Eagle County, with the county seat located 20 miles to the west in the Town of Eagle. The early Eagle River Valley, including the area that was to become Avon, was first inhabited by the Utes. These great Native American horsemen spent winters in the mild climate to the west and returned to, in their language, “the shining mountains”, each summer to hunt mule deer, elk and the great buffalo.
The earliest Anglo-Americans visiting the area were probably hearty Mountain Men trapping beaver to supply fur for city folks' fashionable top hats. In 1845 a dashing adventurer, John Charles Fremont, led his California-bound expedition down the Eagle River through present day Avon and caught what they called a “buffalo fish,” probably a mountain white fish or a very old cutthroat trout, at a riverside camp called “William's Fishery”. The famous Hayden Survey party came to the Eagle Valley in 1873 noting impressive geology near present day Minturn and Squaw Creek, near present day Cordillera. 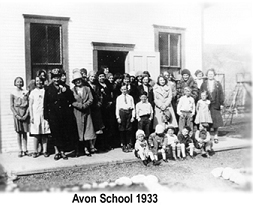 Settlers arrived in the early 1880's, including George A. Townsend who "took up a homestead" of 160 acres, the legal limit, and built a house at the confluence of the Eagle River and Beaver Creek. Mr. Townsend is said to have fancied the name Avondale for the area. At some point, Avon became its official name. Early pioneers, including Townsend, grew hay and raised cattle to feed hungry miners in nearby Red Cliff. Metcalf and Oscar Traer rode together to Central City to witness each other's paperwork “proving up” their respective claims under the federal Homestead Act. Homesteaders also worked together to dig essential irrigation ditches, sometimes using dynamite and a horse-drawn scoop called a fresno, some of which still supply irrigating water to Avon today. As early as July 4, 1891, the Eagle County Times reported “Eagle County is a good place to visit, a better place to settle in, and the best place in the state for capital seeking investment.” 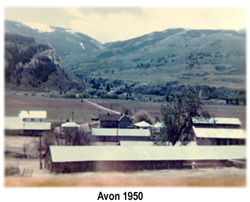 From Lettuce Town to Resort Town

In the 1920’s head lettuce was the crop of choice in Avon and neighboring Beaver Creek and Bachelor Gulch. Box cars stood at the Avon Depot, loaded with ice from the Minturn ice house (the ice had been cut the preceding winter at Pando up near Tennessee Pass) and readied for freshly cut lettuce heads delivered in crates by farmers and their ranch hands including wives. These refrigerated rail cars shipped Avon crops as far as the east coast providing fresh lettuce weeks after the nation's standard lettuce harvest was gone. Through the years Avon land produced cattle, hay, potatoes, peas, oats and, starting in the 1940's, sheep. By this time most of Avon's homesteading families were long gone but descendants of William Nottingham had stayed on and owned and operated nearly all of the land called Avon.
By 1972 Vail had become one of the top destination ski resorts in the country and pressure mounted “down valley” in Avon for ranch land to be developed. One branch of the Nottingham family sold its controlling interest in the land to Benchmark Companies and the Town of Avon was incorporated on February 24, 1978. The new town was comprised of the land in present day central and western Avon including the area that soon became Nottingham Park.
After ten years, in 1988, Avon had a permanent population of 1,500 people. Another branch of the Nottingham family sold the land encompassing present day eastern Avon and the northern hillside to EMD Limited Liability Company, which later formed today’s Traer Creek LLC with Catellus to develop most of the purchased Nottingham property. Residents continued to move to Avon and, in 1998, Avon was home to over 3,000 residents. As of the 2010 census, Avon's population had increased to 6,447 people.
Bibliography: Simonton, June B., Beaver Creek. The First One Hundred Years. June B. Simonton, Vail, Colorado. Copyright 1984. Simonton, Don and June. Living on the Mountain. A History and Field Guide of Bachelor Gulch. Vail Associates Real Estate Group, Inc., Avon, Colorado. Copyright 1996.

The Nottingham Power Plant, a self constructed wood waterwheel, was built on the Eagle River in 1928 andgenerated electricity for use-by the family of Emmett and Myrtle Nottingham and the nearby Avon Depot. The plant was designated a historical site by the Colorado Historical Society in November 2006.